St Michael Llanyblodwel is a Grade I listed church.

It is a medieval building, but was extensively altered in the mid-nineteenth century.  The incumbent, the Revd Parker was also an amateur architect, who decorated the church with painted texts and built a bell tower. 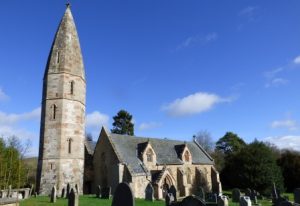 In 2015 it won the highest recognition – The Full Award – from the Oswestry Civic Society for a scheme to conserve the Revd Parker’s painted decoration inside the building.    The restoration was carried out under the supervision of the church architect Mr Tim Ratcliffe who is a specialist in the conservation of plaster and render. 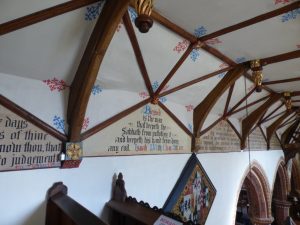 As a result of the increased publicity, the church received more visitors and the Parochial Church council decided to make the existing toilet outside the church accessible to wheelchairs.  I took over from Tim as church architect in 2015, and designed a scheme based on his plans for a w.c. which would be accessible from inside the church as well as from outside, with a ramp down from the church.

The scheme has been agreed by all the interested parties – the Diocesan Advisory Committee, Shropshire Planning, and now Building Control.  We hope to start on site as soon as we receive formal permission (the Faculty) from the Chancellor of Lichfield Diocese.